PRESS RELEASE: Speaker Balindong on the reaction of Secretary of Foreign Affairs re meeting of ICM with Turkish Officials

You are here:
Press Release 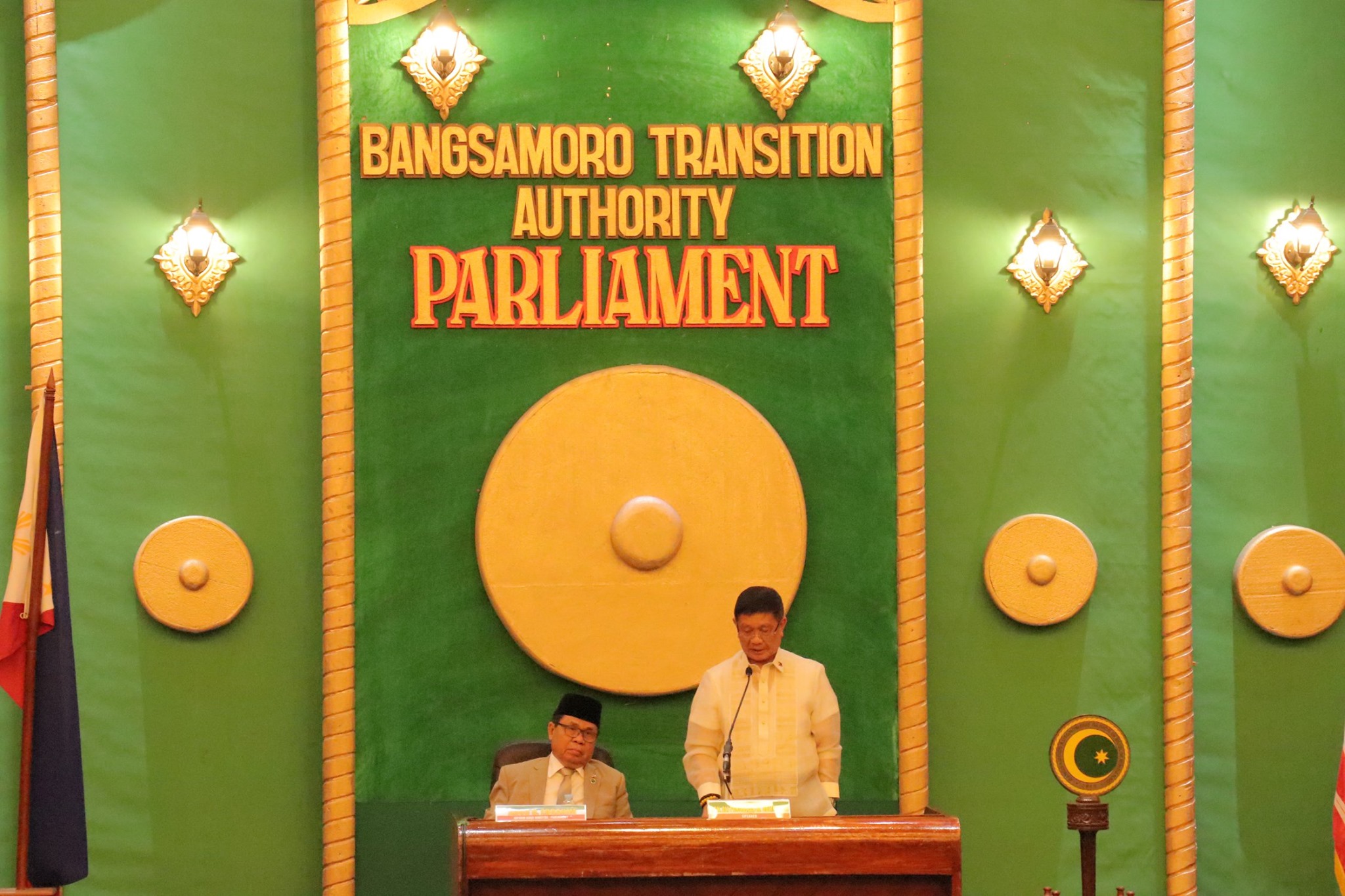 SFA Teodoro Locsin Jr. expressed indignation on Friday morning, 27 December 2019 over what he considered “an ‘unauthorized meeting that violated Philippine sovereignty”. Using his tweeter account @teddyboylocsin, he posted the following.

“Filing a diplomatic protest against Turkey; study charges vs. Filipino BARMM officials involved. If not repudiated by Ankara NOW I propose breaking diplomatic relations. A slap at Philippine sovereignty and an attack on our territorial unity and integrity. Reeks of a Sellout.”

While fortunately it was averted by a timely response of a visit from the Turkish Ambassador, it is imperative that this incident be properly clarified. It is a classic issue of Intergovernmental Relations (IGR) and it suggests that there is so much more to be done in terms of informing the public, especially national officials on the nature of the Bangsamoro Autonomous Region in Muslim Mindanao (BARMM) as a autonomous regional government and its relations to the national government. This popular information is imperative apart from a more expeditious work on institutionalizing IGR. In the first place, it will be impossible to institutionalize IGR without a proper and popular understanding of BARMM as a regional government.

Many of the framers of the 1987 Constitution, including those who took part in the negotiations to the drafting of the then Bangsamoro Basic Law and the eventual formulation and enactment of RA 11054 or the Organic Law for the BARMM (BOL), took note of the “special mention of Muslim Mindanao as an autonomous region, and therefore distinguished from all the other local government units (LGUs). Section 1, the General Provisions of Article X on Local Government enumerates provinces, cities, municipalities and barangays but provides that there “shall be autonomous regions in Muslim Mindanao and the Cordilleras”. In the same Article in the Constitution, Section 15 on Autonomous Regions spells out that these autonomous regions shall consists of “provinces, cities, municipalities and geographical areas sharing common and distinctive historical and cultural heritage, economic and social structures, and other relevant characteristics.

2 important points should be highlighted with these provisions.

BARMM is unlike any and all the LGUs
BARMM is comprised of the LGUs found in its territory, that the latter is constituent to the former.

There is then no way to deduce that the BOL is not based from the constitution. Section 3 of Article I of the BOL emphasizes this that the purpose of the organic law is to allow for “meaningful self-governance within the framework of the Constitution and the national sovereignty as well as territorial integrity of the Republic of the Philippines”. The nature of BARMM as a regional territory and government of the country further emphasizes its consistency with the provisions of the constitution cited above as provided for in Sections 1 and 2 Article III of the BOL.

It is then but consistent that BARMM as an autonomous governmental entity is given specific powers. The following should be noted as relevant to the issue raised by the SFA.

Section 2. Self-Governance. In the exercise of its right to self-governance, the Bangsamoro Autonomous Region is free to pursue its political, economic, social, and cultural development as provided for in this Organic Law.

The role and or the authority of the Department of Foreign Affairs (DFA) with or over BARMM with respect to the powers granted to it should be clarified; especially considering that these powers purportedly falls and therefore conflict with that of the department. It should be clarified for example why the SFA would assert (as reported sometime in August) that foreign governments are “not allowed to give monetary donations or extend assistance to the BARMM unless approved by the department. Considering the powers given to the autonomous government, this assertion should have been reflected on considerably first.

The grant of powers especially on cultural exchange, economic and technical cooperation, including trade and industry is unequivocal. The following provision in the BOL illustrates and supports the previously cited provision of the power of the BARMM.

Section 28, under Economic Agreements and Conventions. Cultural Exchange, and Economic and Technical Cooperation.- The Bangsamoro Government may establish linkages for cultural exchange, economic and technical cooperation with countries having diplomatic relations with the Philippines upon review and approval of the National Government. The Bangsamoro Government may recommend to the National Government the assignment of qualified persons in Philippine Embassies and Consulates, and their participation in international delegations.

Again, this grant of power is qualified. BARMM “may establish linkages but “with the review and approval of the National Government”. In other words, the grant of power is undeniably there already. BARMM can initiate establishing linkages but for it to be complete has to be coordinated with the National Government. In other words, it has to be operationalized clearly if said powers are to be exercised meaningfully. This can be done only if the roles of the different NGAs are defined with respect to the work of the BARMM.

Without the need to overemphasize, BARMM is a new political entity, even different from its predecessor that is the Autonomous Region of Muslim Mindanao (ARMM). The dynamics have therefore changed hence the need to categorically provide for an IGR, which is the critical component of operationalizing the exercise of said powers.

Section 1. General Supervision.- The President shall exercise general supervision over the Bangsamoro Government to ensure that laws are faithfully executed. The President may suspend the Chief Minister for a period not exceeding six (6) months for willful violation of the Constitution, national laws, or this Organic Law.

There are thirteen (13) provisions under this Article, forming various councils and boards but these first 2 sections provide the overall most critical mechanism. What is clear is that such an IGR body is created by law and has to be convened soon if issues similar to the one raised by the SFA are to be avoided.

For starters, the general supervision of BARMM, a power that is given to the President has to be clarified. The same power is provided for over LGUs and is operationalized by the “Doctrine of Qualified Political Agency”. This explains why, even if there is reason to admonish the Department of Interior and Local Government (DILF) on including the BARMM Chief Minister on its issuances to the LGUs, it has to be made explicit why it should not be the case. What is indisputable is that BARMM is not like any other LGU as already clarified in the foregoing and is given considerably more powers apart from a different relational dynamics with the national government.

Given all these, the government should have been saved from embarrassment if the agencies concerned made efforts to coordinate or at the very least clarified matters with the other agencies or officials. The terse act of the SFA only suggests incapacity to understand the relationship of the agency with that of BARMM or even utter contempt of the latter. It should be noted that Turkey, in fact recently including Saudi Arabia, and other Islamic countries have expressed support and interest in working directly with BARMM. It would be prejudicial to the country’s interest if this were not given consideration by the national government, especially by the SFA and continues to assert authority over BARMM regardless of the powers already expressly provided for by law. What is needed is not to curtail or deny the exercise of these powers but to clarify how it relates with the powers of the different NGAs.

No foreign government will work with any entity or person without authority of and from another country or government. This is basically what happened with the official visit of the BARMM Chief Minister to Turkey. Imagine meeting with the Turkish senior officials, the Deputy Minister for Foreign Affairs, officials from the Turkish Coordination and Cooperation Agency, Office of the President for Turks Abroad and Related Communities, including the Turkish Disaster and Emergency Management Authority, if one is not given authority to do so. There has to be a reason why the Turkish side “thought it was ok to invite the Chief Minister to official meetings. There is every reason why the Chief Minister has authority to travel as an “official of government”, with the authority to meet with counterparts in a foreign country. This should have been noted by the DFA and the SFA before making any unwarranted move.