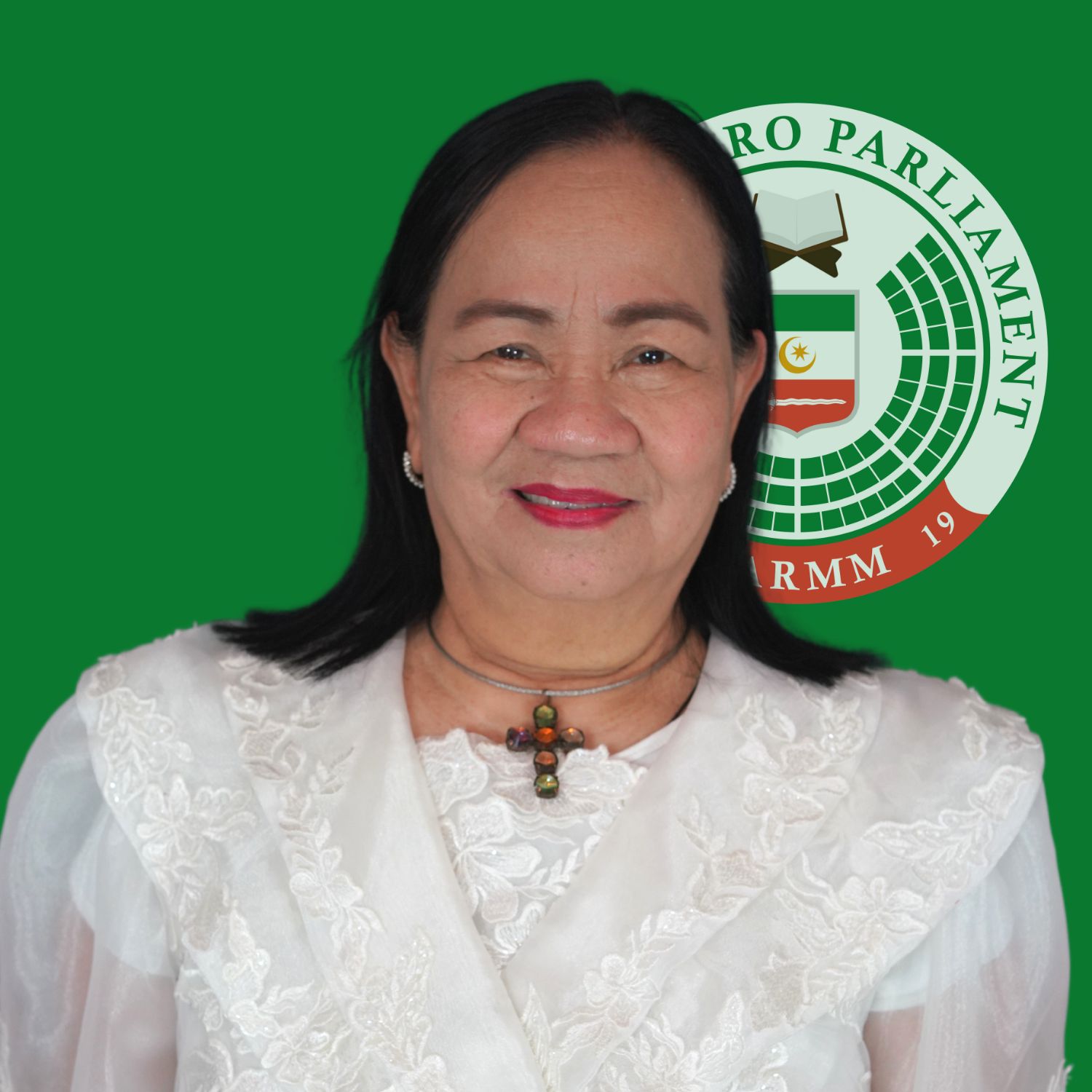 She was born in the northern part of the Philippines, but her parents migrated in Mindanao where she grew-up, was educated and started her career as public servant. She was raised as Catholic-Christian in a mixed community of Indigenous Peoples and Maguindanao Muslims.

She is a Peace Educator and holds a Doctor of Philosophy in Peace and Development degree from the Notre Dame University in Cotabato City. She also holds a Master’s in Public Administration from the Mindanao State University in Maguindanao.

• Department of Trade and Industry in the Autonomous Region in Muslim Mindanao
-Chief Technical Division Management until she was appointed as BTC Commissioner by President Rodrigo Roa Duterte
• Department of Trade and Industry – Autonomous Region in Muslim Mindanao Loyalty and Service Award 2014
• Affiliated with many governmental and non-governmental organization’s
• Chairperson -Multi-Sectoral Advisory Board (MSAB) for 4 years,6ID KAMPILAN PA, gains the title “Best Training Camp in the Philippines “ for 4 consecutive years.

• She is also a National Awardee as “Outstanding Civilian Stakeholder Award
2018’’ Given by the Philippine Army, Fort Bonifacio, Taguig City March 22,2018
• NAMFREL-Chairperson Maguindanao Chapter
• Global Associate – Goldin Institute Philippines- a non-profit organization based in Chicago, Illinois, USA that works directly with communities around
the globe. she initiated the project “Access to clean water in conflict affected schools in Maguindanao and North Cotabato to include Cotabato City.

She was a member of the expanded Bangsamoro Transition Commission under EO 08,signed by President Rodrigo Duterte on Nov 6,2016 and appointed by PRRD as Commissioner on February 24,20`17 ,tasked to draft the Bangsamoro Basic Law,now RA 11054. She introduced the Peace Education Program in the prestigious Graduate Schools in Mindanao in Southern Philippines-the Cotabato City State Polytechnic College (CCSPC),Now Cotabato City State University and the Maguindanao State University (MSU) in the year 2009 and 2004 respectively.

Currently, Member of the Parliament of the Bangsamoro Transition Authority which was appointed by President Rodrigo Roa Duterte on Feb 22,2019. As a Legislator, she has passed numerous Resolutions and also passed Bills, as main authors. she filed several Resolutions calling for the promotion of human rights and gender, and general welfare of the Indigenous Peoples, the widows and orphans of war . She also authored, “An Act Creating an Office
for Settler Communities” among others. She is also a visiting professor at the Graduate School of Mindanao State University-Maguindanao and Cotabato State University in Cotabato City.

Let us take inspiration from former Commissioner and now Member of the Parliament Dr. Susana Anayatin.