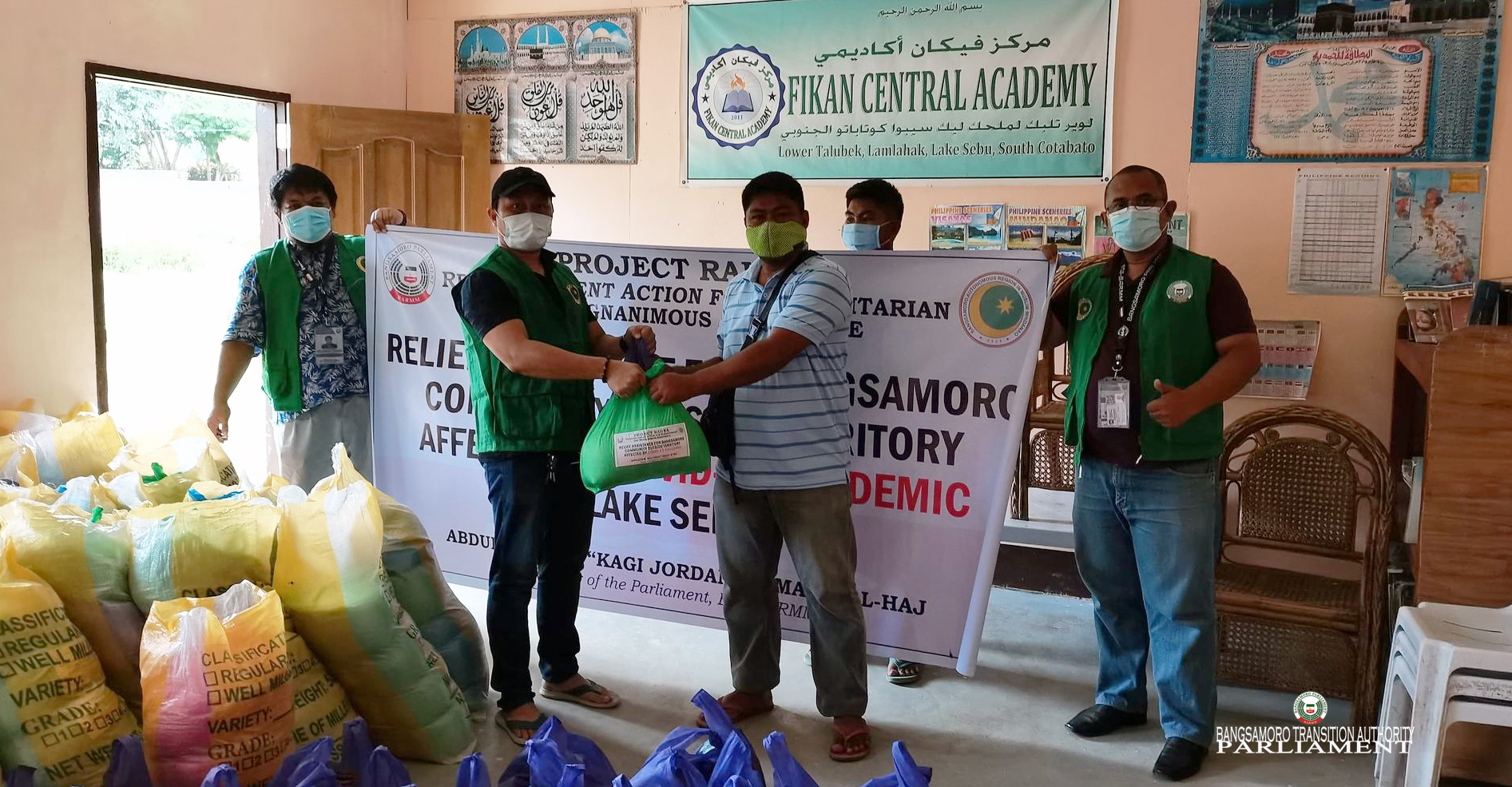 COTABATO CITY — The Office of Bangsamoro Transition Authority (BTA) Member of Parliament (MP) Abduladzis “Kagi Jordan” M. Esmael reached out on Friday, September 04, 2020 to the people of Koronadal City and Lake Sebu town in South Cotabato through his initiative program, the Project RAHMA (Reinforcement Action for Humanitarian and Magnanimous Assistance).

“We took the initiative to extend assistance to further bridge the gap between the inmates and the Bangsamoro Government. The program aims to let the people outside BARMM core territories to feel the presence of our government. Our policy on inmates is corrective and not vindictive. These inmates are still waiting for the final disposition of their cases and we don’t want them to feel neglected. Their right to be presumed innocent until proven guilty is still there with them to enjoy. We want them to keep showing exemplary character and to feel that their government is there to provide for their needs,” MP Esmael emphasized.

MP Esmael shared there are about 260 Muslim inmates inside the provincial jail of South Cotabato.

“There are significant number of Balik Islam and is fast increasing inside the jail. But the goods provided are intended for the whole population of the provincial jail and not just for the Muslims,” he stressed.

On Saturday, September 5, Chief of Staff (COS) Khalid S. Esmael and his team went to Lake Sebu to provide relief assistance to around 175 T’boli families which include rice, canned goods, noodles and hygiene kits.

“We extended aid to families of Sitio Lower Talubek in Barangay Lamlahak. Their leaders, Ustadz Abdul Rashid Pikan Dalikan and Ibrahim Abdulhakim Pikan Dalikan wholeheartedly welcomed our team. On behalf of the Balik Islam community of T’boli in the municipality of Lake Sebu, they expressed gratitude to the BARMM government for the support and assistance we have extended,” COS Esmael said.

During the activity, the beneficiaries strongly manifested their support to Project RAHMA as an ‘instrument to peace and development initiatives’ in the Bangsamoro Autonomous Region in Muslim Mindanao (BARMM) and in communities outside the core territory.

“We hope that more families in our community shall also benefit the assistance from the BARMM government thru the Project RAHMA of the Office of MP Esmael,” Ustadz Abdul Rashid cited in his message.

Meanwhile, MP Esmael vowed to help the poorest of the poor families inside and outside of the Bangsamoro region. He stressed Project RAHMA was designed to reach those communities that are rarely reached by the government during the COVID-19 pandemic as well as those less fortunate families wherever they are.

“Poverty can cause a lot of social problems in our communities. If we will not let the people feel our presence, then all our peace and development initiatives and efforts will be all in vain. We all cried for social injustice. What form of social injustice would be worse than having no access to food for your own family? With this, the concept of Project RAHMA as a flagship program of this office is now in full operation,” MP Esmael emphasized. (GALao with reports from the Office of MP Abduladzis Esmael, Publication and Media Division, BTA Parliament)