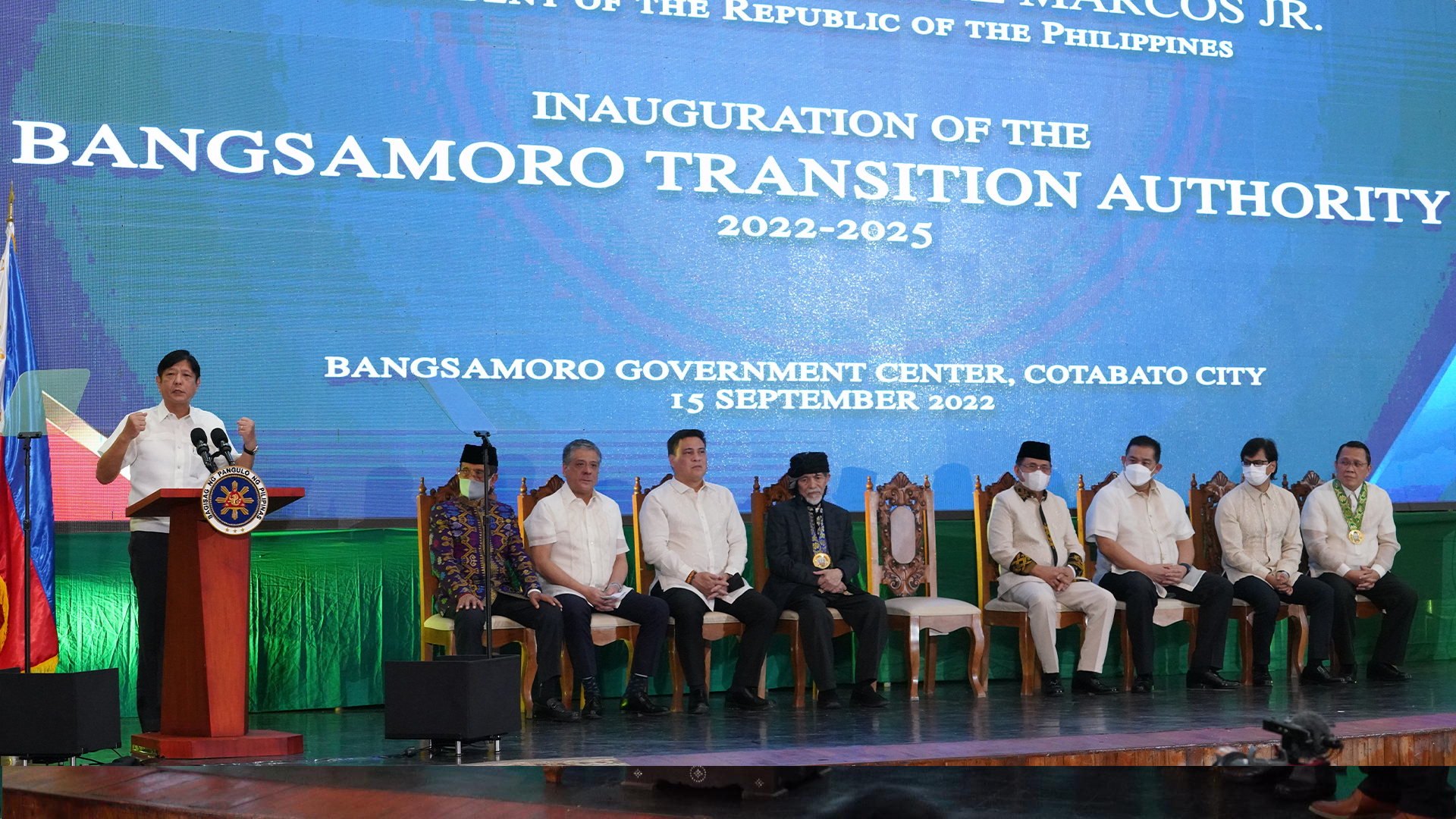 COTABATO CITY — Committing to support the peace process in the Bangsamoro region, President Ferdinand “Bongbong” Marcos, Jr. made his first visit to the region after assuming office to lead the historic inauguration of the Bangsamoro Transition Authority.

“I assure the BTA and all the Bangsamoro people of this administration’s full and unwavering commitment to the peace process and the BARMM,” said President Marcos, Jr. on Thursday, September 15.

President Marcos and reappointed interim BARMM Chief Minister Ahod Ebrahim led the ceremonial beating of the agong at 12:13 in the afternoon, hours after the inaugural session of the new members of the Bangsamoro Parliament.

“We are steadfast in our commitment to the peace process here in the southern Philippines, so we push for socio-economic development interventions to promote peace and development in areas affected by decades of conflict,” he said.

The 80 new BTA members took their “oath of moral governance”, under the leadership of Chief Minister Ebrahim, to reassure the public that the Bangsamoro administration is committed to sustaining good governance in the BARMM.

In his speech, Ebrahim highlighted the collective efforts and significant milestones of the Bangsamoro government.

According to Ebrahim, taking the oath of moral governance is a sign of the government’s “renewed commitment to dutifully finish the transition priorities, fight the ills of governance, and fulfill our Amanah, our trust to the Bangsamoro people.”

The previous BTA enacted a total of 31 laws, including three priority codes, such as administrative, civil service, and education.

Ebrahim also said they plan to file more than 20 cabinet bills upon the start of the formal sessions of Parliament, which includes the remaining priority codes.

“We commit to delivering the Bangsamoro Electoral Code and the Local Governance Code, if not by the end of the year, then by the first quarter of 2023,” he said.

“I also encourage the BTA to pass measures that will ensure the welfare of the Bangsamoro, particularly in agriculture, fishing, healthcare, transportation, communication, digital infrastructure, and e-governance,” President Marcos said.

He urged the BTA to pass all the crucial legislative and fiscal policies, particularly on taxation, and to facilitate the conduct of elections in BARMM in 2025.

“We walk not because it is easy; we walk this path together because even if it is difficult, we know that at the end of the journey, this historical justice, progress, peace, stability, and unity of our people and nation that we have so aspired for are so rightly deserved,” Marcos said. (LTAIS-Public Information, Publication, and Media Relations Division)