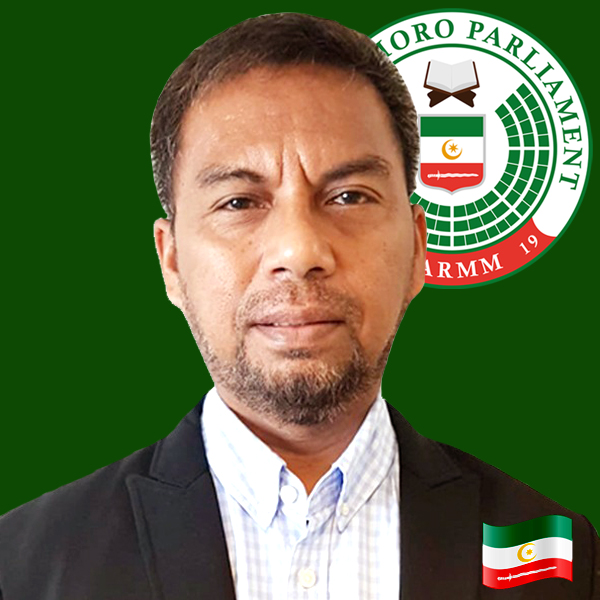 Biosketch of MP Abdulmuhmin A. Mujahid

Ustadz Abdulmuhmin Alyakanie Mujahid is a pure Yakan from the island province of Basilan which is part of the Bangsamoro Autonomous Region in Muslim Mindanao. He is a son of former MNLF combatant who was martyred during the early stage of Moro National Liberation Front’s revolution. At young age, he pursued his Islamic Studies and Arabic College in Tipoli Libya wherein he graduated in 1992 with Ijazah, a license authorizing its holder to transmit Islamic religious knowledge, with the help of Libyan scholarships grant given to him by the government of Libya. In addition to that, he too studied Public Administration in Mandaue City College in 2016.

In 1997 up to 2004, when he came back home to Basilan from Libya, he was elected as Chairman of the Basilan Ulama Supreme Council in which peace advocacy and religious affairs were prioritized for the communities in the name of security and development. He was elected, when he then joined politics, as Provincial Board Member of Basilan from 2001-2007, and afterwards appointed as the religious adviser of the Provincial Government of Basilan in 2009.

During the existence of the previous Autonomous Region in Muslim Mindanao (ARMM), he was appointed by the Office of the Regional Governor as Commissioner and Community Consultant due to his vast experience in handling community affairs in the grassroots level from 2010-2011 and 2012-2013 respectively.

Afterwards, in March 2014, he was appointed as Executive Director of the Office of Regional Darul-Ifta’-ARMM until January 2019. During his tenure as Executive Director, he was able to unite the Ulama of the provinces of Sulu, Basilan, Tawi-Tawi, Lanao del Sur and Maguindanao including Palawan, Zamboanga peninsula and other parts of the Philippines because of his ardent endeavor in acknowledging the great roles ot the religious sectors in a community especially when it comes to fighting deviant ideologies that have long been marring the pristine teachings of Islam.

Thenceforth, he established the office of Provincial Darul-Ifta’-ARMM in every province in order to sustain the indispensable roles of the Ulama in community building under the banner of peaceful Islam. Such as, among others, their lecturing of school children after flag ceremonies in order to inculcate to the minds of the students at an early age the real and correct guidance of Islam; aside from the preaching of the imams from the pulpits of mosques who were also instructed to do their part. Moreover, he also spearheaded the very First Ulama Summit Against Terrorism which was held in Cotabato City on May 11-15, 2017 which was attended by security sectors ang religious organizations coming from the different regions of the country with over five hundred (500) participants/attendees present in actual.

Finally, when the Bangsamoro Autonomous Region in Muslim Mindanao sprang after the January 21, 2019 Bangsamoro Organic Law’s triumphant plebiscite, he was once again appointed as Member of the Bangsamoro Transition Authority on February 2019 along with other appointees coming from the Moro Islamic Liberation Front and MNLF affiliates.